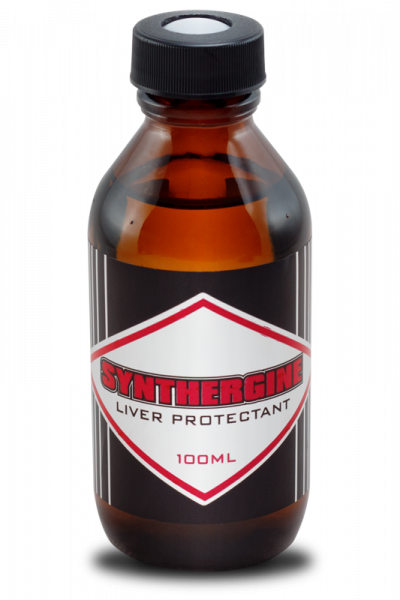 Synthergine™ is guaranteed to be the most potent liver conditioner/detoxifier in the world!

Synthergine™ is guaranteed to be the most potent liver conditioner/detoxifier available in the world. Synthergine™ is especially useful for conditions where the liver gets stressed due to the toxicity of certain bodybuilding chemicals.

Arginine HCL – Arginine is required for proper elimination of urea from the body. This occurs through a critical metabolic cycle which detoxifies the body of nitrogen compounds that are manufactured in the liver or by intestinal bacteria action. Subtle impairments of the liver’s function can often lead to subclinical symptoms of hyperammonemia, which is the condition of poor excretion of urea. Symptoms of hyperammonemia may include chronic fatigue, headache, irritability, occasional diarrhea or nausea, lack of concentration, mental confusion, and intolerance to various foods, particularly high-protein foods.

Sodium Glucuronate – is a nutritional substance used by the liver to bind to toxins (excess hormones, food additives, cigarette smoke, etc.) and eliminate them from the system. Of all the chemical reactions taking place in the liver cell, the elimination of toxic substances via glucuronate binding is considered the most important. Clinical studies have shown glucuronate supplementation can improve liver function considerably because it reduces stress on the liver and enhances the organ’s ability to detoxify.

Di-isopropylamine Dichloroacetate (DADA) – is a peripheral and cerebral arteriole vasodilator. DADA assists in hepatic detoxification of heavy metals, nitrites, and organophosphates. DADA provides muscular and hepatic system support in athletic animals, especially during the stress of training and hard physical work, and in the presence of high energy diets. DADA is a potent peripheral and cerebral arteriole vasodilator, and assists in the hepatic detoxification of a number of metallic and chemical metabolites including intoxication by heavy metals, nitrites and organophosphates.

Lysine HCL – one of the 8 essential amino acids. It improves immune system function and it helps tissues regenerate themselves after damage (such as liver tissue after toxin damage) Methionine HCL – an essential, sulfur-containing amino acid. It is the source of sulfur for numerous compounds in the body, including the amino acids cysteine and taurine. The body uses sulfur to influence hair follicles and promote healthy hair, skin, and nail growth. Sulfur also increases the liver’s production of lecithin (which reduces cholesterol), reduces liver fat, protects the kidneys, helps the body to excrete heavy metals, and reduces bladder irritation by regulating the formation of ammonia in the urine. Methionine is a lipotropic – a nutrient that helps prevent fat accumulation in the liver, and usually helps detoxify metabolic wastes and toxins.

Check out some of the blood test results submitted by some of our customers showing the effect that that Synthergine has had on their liver values:

There are no reviews yet.

Be the first to review “Synthergine – Liver Protectant”

shopping_cartAdd to cartcheckAdded to cart!
0